Hi, I'm Zara Khalique ! I create & run all things Keep It Bright, which is my positive lifestyle brand, which i started back in 2007 as a passion-project; a way to spread light & uplifting messages to those who need it. I still have that same mission today, and put my heart & soul into the things i make for the world.

My aim is to empower, uplift & encourage.

I'm a one-woman-brand, and I'm on a mission to make the world a brighter place, with my real-talk, every-day brand of positivity.
+
The Keep It Bright mission is to help you, to help yourself to
make your life the best and brightest it can be;

+ by teaching you to love yourself and know your worth
+ by reminding you to appreciate your life and everything in it
+ by keeping you motivated and focused on your goals and dreams
+ by inspiring you to be more and to know that there is no limit to what you can achieve
+ by reminding you to be kind & compassionate to others
+ by empowering you to stand up and speak out for all things important
+ and by helping you to keep a positive attitude and truly live on the bright side of life.
+

"Instagram isn’t the safest space in the world when it comes to our self esteem. Bikini-clad models and celebrities are all over our feeds, not to mention endless fitness accounts and air brushing filters. They all serve as a constant reminder of exactly how insane our society’s beauty standards are. Luckily some people have made it their mission to change the messages that we're hearing across the internet, to both empower women and provide them with a place online that can actually elevate their self worth. Zara Khalique is one of these everyday heroes. She is followed and supported by some of our favourite celebs like Miley Cyrus, Bella Hadid, Ed Sheeran, Miranda Kerr, Ariana Grande and Bastille, to name a few."
- Teen Vogue

"Zara Khalique is utterly sincere when discussing positivity. It became her way out of the darkest of times. It might sound overly simplistic: think positive and the rest will follow.But that became so integral to how Zara flourished from an angst-ridden teenager to a woman realising her dream career, that she feels compelled to spread the word. Anyone tempted to think the 27-year-old commoditised the ‘positive-thinking movement’ for the new Instagram generation to boost her successful lifestyle brand should reconsider. She talks with authenticity about how, above all else, she wants to help young women just like her who need something to help them through bleak times."
- Liverpool Hope University 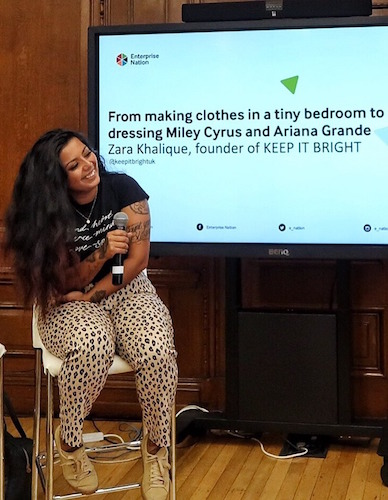 Zara Khalique is a 28 year old Warrior Of Light; she lives to make the world a brighter, better place. She lives in Manchester, England and has been Keepin’ It Bright since 2007, when she created her brand from her bedroom, with just big dreams in her head and a mission in her heart!
Zara runs every aspect of Keep It Bright, from designing the entire clothing and lifestyle range (which features ready-to-wear printed items featuring her hand drawn designs to one-of-a-kind handmade pieces), to writing the Keep It Bright Books, mentoring and giving guidance to those who need it. She has lead many positive & creative workshops and is a role model & mentor to people of all ages, all over the world.
She spreads positive messages daily, Instagram is her main and most followed platform online, with superstar celeb followers like Ariana Grande, Miley Cyrus & Miranda Kerr.
To date, Zara has released 4 books full of the Keep It Bright way of living, the latest; The Keep It Bright Book is available to purchase here. Its predecessor, the Keep It Bright Handbook is loved by thousands worldwide including Miley Cyrus, and supermodel Miranda Kerr calls it a ‘handbag essential’!
Zara has released 2 seasons of her podcast; The Bright Side Podcast to date, it is available on iTunes, Spotify, the Podcast App & Soundcloud.

Keep It Bright clothing has been worn by some of the biggest celebrities in the world, from Ariana Grande to Alicia Keys, Miley Cyrus to Ed Sheeran, click here to see pics & vids of these stars Keeping' It Bright.
+

In 2019 Zara was featured in an article on Enterprise Nation, and her latest interview, with Rinny&Bean can be found here. She was a guest on BBC Radio Manchester's 'The Dead Good Show', a guest on the Bare Naked Chats podcast and the Put Yourself First podcast.

Zara was anounced the winner of the 2016 Future Leader Award at the inspire* Inaugural Ball for her philanthropic work with Keep It Bright, and was also named as one of Ten Outstanding Young People in the UK for her work and awarded by JCP in November 2016.

In 2016, Zara was interviewed on BBC Radio 1Xtra's Generation DIY for her work with Keep It Bright.

In January 2016, Zara was announced as Native Youth’s Native Manchester.

Zara feels passionately about standing up against bullying, abuse, domestic violence and violence of all kinds, and started her campaign Someone’s Everything back in 2012 independently, printing flyers and posters and distributing them amongst the community and around the country.

She was nominated for the Dalai Lama Compassion Award 2012 and the Red Cross Humanitarian of The Year Award 2013.

In 2014, she started her Promise Me campaign which aimed to promote Self-Love & Care and stop Self Harm, over 500 people made their promise.

In 2013 Zara began Keep It Bright TV - a youtube channel that provided a platform for positive, motivation & inspiring music with interviews with the artists, which she co-hosted. Zara relaunched her channel in 2015, and now creates video content based around different aspects of positivity & self love.

In 2012, Zara was chosen to go to Ethiopia to work with street children by GMP & Retrak, read her diary from her trip here.